Memory Verse: I Samuel 16:13– “Then Samuel took the horn of oil and anointed him in the midst of his brethren; and the Spirit of the Lord came upon David from that day forward.  So Samuel rose up and rose up to Ramah.” 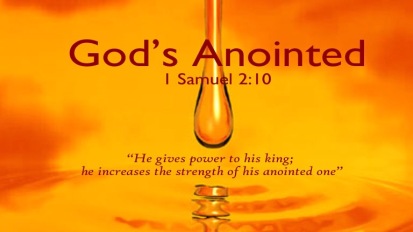 Samuel was very disappointed that Saul did not succeed as being king of Israel.  The people had asked for a king.  God gave them Saul.  Saul was anointed by Samuel, but he did not fulfill his anointing because he was disobedient.   While we are troubled over our disappointments, God is still on his throne.  We will have times of disappointment,“weeping may endure for a night, but joy cometh in the morning.”  God’s response to us is the same as it was with Samuel, that he will provide. (I Samuel 16:1; Psalm 37:23-25)

Hannah, the mother of Samuel, dedicated him to the Lord before he was born.  He was obedient to the will of God.  He was directed what, when, and who to anoint by God.  The beautiful aspect of being anointed is when we allow God to fulfill his will through us.  Our total reliance is on the power of God. Samuel provided spiritual counsel for Israel.  He was the mediator between Israel and God, when they complained about wanting a king. He was the one to anoint Saul and one of the sons of Jesse, who was to replace Saul. (I Samuel 1:11, 10:1)

We learn to trust in the guidance of the Holy Spirit.  In Samuel’s case, God commanded him “fill thine horn with oil and go.”  Samuel was commanded to go to Jesse the Bethlehemite.  It was there that a man was to be anointed to be king of Israel. The oil symbolizes the Holy Spirit.  People who were anointed were set apart and empowered to do a work in the service of God. (I Samuel 16:2, 3)

When the elders of the town saw him coming, they inquired for what purpose.  When prophets of God would come among the people, they encouraged attention.  Samuel will be remembered for anointing a king who was in the family lineage of Jesus. (I Samuel 16:4; Matthew 1:6)

Samuel thought that Eliab was to be the next king.  Many time things do not happen right away.  We have to wait on the Lord.  When the Lord reveals to us by his spirit, it does not mean that the end result or the answer will happen in the immediate time. We can’t make hasty decision. (I  Samuel 16:6)

God told him not to look on his countenance or on the height of stature.  People have a tendency of choosing people for certain position based on their looks—height, complexion, financial status, etc.  The faithful believer accepts that God is the one that empowers us to do all things. (Proverbs 3:6; II Thessalonian 3:6)

We only see the outward of a man, but God see the inward man.  He knows the heart.  He knows our every thought, intended and not intended.  He knows when we are real and when we are pretending.  God knows who is going to do what he need.  Seven of Jesse’s sons passed before Samuel.  None were chosen by the Lord. (I Samuel 16:6-10; Isaiah 55:8; II Corinthians 10:7)

Samuel inquired if there were any more sons.  Jesse had one more who was tending to the sheep.  David came forth from the field and the Lord spoke to Samuel to anoint him.  David was a young shepherd boy, but handsome.  He was called and anointed at very early age. (I Samuel 16:11)

Samuel took the oil and anointed David king in the midst of his brothers.  It was years later that he took the throne. Samuel secured the throne for David. The manifestation of one’s anointing spans over the life of the individual.  We are saved, by believing in Jesus.  We are sanctified, set apart.  We are Holy Ghost filled with the power of one greater to direct our lives. (Romans 10:13; I Corinthians 2:16)

The holy oil is still used today to anoint people to do the service of the Lord.  When we anoint ourselves or others, we are indicating that we are indeed the weak vessel and we need the mighty power of God to take hold of our lives.  The disciples used the oil when Jesus sent them out on their missions to heal the sick.  Anointing is exercising our faith in the working of the Holy Spirit.  The power is not so much in the oil, as it is in the believer to believe that God will give them power of their flesh to do whatever they request of him! (Mark 6:13; James 5:14)

In conclusion, while you are waiting for God to do all the possible things, will you allow him to use you to do what seems to be impossible, to the glory of the Lord?  Let his anointing fill you. (Ephesians 3:14-21)

© 2021. All Rights Reserved to Path of Righteousness Church in Christ. Please credit if used.